Not quite sure what cool and refreshing snack your customers are craving? Some people find themselves overwhelmed with the selection of frozen snacks nowadays. Here is a brief explanation of the differences between all the frozen desserts out there.

Air: Upwards of 50% (comes from the churning process).

Gelato – from the Italian word gelato meaning "frozen" Less air. Base has more milk than cream.

Air: 20-30%: churned at a slower speed than ice cream, resulting in a denser product with more intense flavors. Stored and served at a higher temperature than ice cream, usually not quite frozen.

FUN FACTS: Originated in Italy and became popular in the 1920s and 30s. 55% of gelato is still handmade in Italy. In Italy, by law, gelato must have at least 3.5% butterfat.

Frozen Yogurt- yogurt culture is used instead of cream.

Originated in the U.S. in the 1970s by H.P. Hood, the product was called Frogurt. Originated frozen yogurt was too tart – it didn’t take off until the 80s when more sugar was added.

Soft-Serve – Pre-mixed soft serve is stored at 5 ºF and frozen quickly on way out if machine.

Originated in the U.S. in the 1930s, although there is a debate about who created it. The higher the air content, the creamier, smoother and lighter the product will be.

Italian Ice – Also called water ice, is a sweetened frozen dessert made with fruit or other natural or artificial food flavorings, similar to sorbet. Water ice is not shaved ice that is flavored; rather, it is made by the same process by which ice cream is made: freezing the ingredients while mixing them. Italian ice is similar to sorbet, but differs from American-style sherbet in that it does not contain dairy or egg ingredients, though it may contain egg white. The true origin and history of Italian ice is unclear.

Acai - Acai berries are known as a super food because of their many health benefits. They offer high levels of antioxidants, fiber, protein, amino acids, phytonutrients and heart healthy omega 3, 6 and 9. Frozen acai pulp is blended with various fruits and coconut, soy, or almond milk. The consistently of acai is similar to soft serve. Commonly enjoyed for breakfast.

Give us a call to learn more about Electro Freeze equipment and how it will keep your customers coming back for more! (916)925-5600

We look forward to speaking with you! 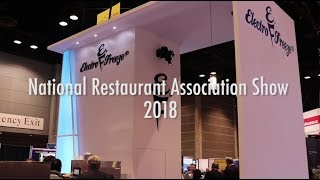 Discover, learn, and connect at the 2017 NRA Show.

7 Important Tips When Designing Your Menu